Running a goth night is hard 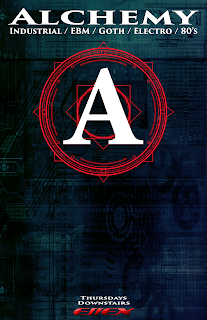 For the last year and a half I have been helping run Phenox and now Alchemy which are the local weekly “Goth Nights” at Effex Nightclub. I wanted to write up a bit about the nights and how things have gone, and where we want to go.
I started working at Phenox by accident mostly. I think I was standing in the back one day talking about how much better it could be if they just put some more work into it; At the time for visuals they were just looping music videos that were on the house laptop which consisted of mostly popular hip hop and rap videos. Not the best background videos for a goth / industrial / alternative club night. I didn’t realize it but one of the guys running it was nearby and said, well why don’t you help out? I thought it over and said, yeah I can throw down some visuals next week. A year and a half later I now co run the night with Kenny. What a strange ride its been.
First off I wanted to thank Phenox / Daniel for starting this whole night. The goth scene had been mostly dead and there had not been a weekly night for some time. Out of nowhere Daniel got the biggest nightclub in town to give us Wednesdays to throw an event. It started off slow, but we all built an amazing night together.
Today we run every Thursday downstairs at the main room at Effex. We moved to Thursdays since we had noticed less people were able to make it out Wed nights, and Thursdays was always the traditional day for these nights going back to KGB and before. We have a number of rotating DJ’s, a resident VJ (me) and a number of helpers and support staff.
Running an alternative night is not as easy as I had expected. We do this for free because we love the scene and the music. I have not made a dime off of this night, and I have spent countless hours making flyers, websites, logos and branding, and visuals for the night. I just wanted there to be a fun place to go for us alternative folks who can listen to good music, have a drink and dance or relax. Regardless I am happy with what we have been able to make, and the awesome support of Effex and our DJ’s / crew. Without Kenny, Daniel, Carlos, Pi, Brian, Spencer, Marino, Ehrin, Kate, Paul, Defiant and everyone else who has helped out in any way we would not have this night.
I hope in the coming months that we can continue bringing you some amazing rotating DJ’s and some new events and theme nights. We want to keep adding to the night and have some more things going on to entertain people. We have some theme nights in the works to spice up the weekly events, and are working on getting some stickers / shirts made for giveaways. Check out the Alchemy Facebook Page and NMEBM.com to keep up to date!

Popular posts from this blog

January 29, 2016
2016 is here already. I bought DeskPM to try and help me get more blog posts up since I really am not a big fan of the blogger interface. Anyways expect to see some posts on Modular Synths, VJ stuff, and other general tech / hardware / auto things. Here is a random pic of my Turing Machine pre build to see if DeskPM will work with my blogger acct.
Post a Comment
Read more

August 14, 2013
A while back at Music Go Round I saw something propped up in the corner behind the counter. It was a Roland Juno-6 in what looked to be good shape with just a broken ARP mode select switch and a key with a broken end. They just got it in and didn't want to fix it so they were selling it as it really cheap. Like really really cheap. So I bought it instantly and went home and found a key and switch on ebay for about $10 each. Replacing the key was a fairly simple, but the switch was a little more involved. Roland Juno 6 with broken key and switch. Roland Juno-6 key replacement 1. Remove the two upper screws on the left and right side of the wooden side panels. 2. Remove the screws on the bottom of the synth that attach the keys to the frame. There will be two rows of screws aligned with the front and back of the keys. 3. Gently flip up the metal control panel lid. Removed 4 side screws to open control panel. 4. Remove the spring attached to the top rear of the ke
1 comment
Read more

July 22, 2015
For Pax Prime this year my friends and I decided to do a Destiny group cosplay. Cnidarium will be going as the Queen of the Reef aka Mara Sov, Pippi and IX as Petra Venj & The Speaker, and I will be going as the Queen's brother Uldren Sov aka The Crow. Now even though the Queens brother is fully rendered and has some screen time in the cutscene when you goto the reef, there is hardly any concept art or official images of him online. Bungie released some character turnarounds for the queen and such but none for his brother. However, after scouring the internet, I found the original concept artists page on Artstation with some prototype renders for the Crow! Not exactly what I need, but its better than nothing. It appears that the initial designer for the crow is Zeke Garcia and he has some renders up which i have not seen on any of the other Destiny sites. Also if you look at the bungie employees on Artstation there is alot of concept art which is pretty rad. I'v s
Post a Comment
Read more